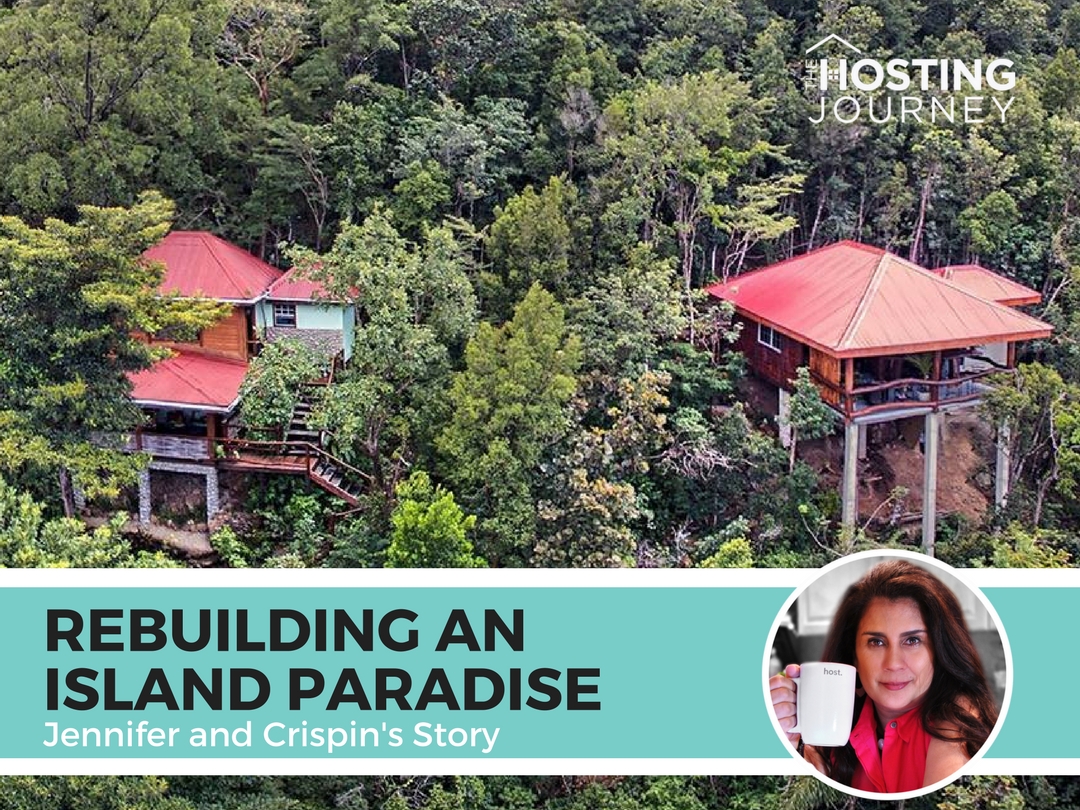 Some of the links mentioned are affiliate links. if you choose to make a purchase, I may earn a commission. Commissions come at no additional cost to you.
“Rebuilding an Island Paradise: Jennifer and Crispin’s Story” is a different kind of episode… It’s the bittersweet story of two Airbnb hosts. Trust me, though, by the end of the episode, I promise their story is more sweet than bitter… So, stay with me.
Listen & Subscribe via iTunes

Crispin always wanted to return to his native land of Dominica. For those of you who aren’t aware of this little nation… I know, we’re not all geography majors… Dominica is a beautiful paradise island located in the Caribbean sea… If you’re not aware of the Caribbean sea… Well then, just sit back and listen…

As I was saying, Crispin shared a dream with his wife, Jennifer, that once their kids were grown and once they had saved up enough money in the states… they’d head back and enjoy a simpler, more relaxing life… I did mention Dominica is an island paradise, right? OK. So, once all of the above items were checked off their list… Kids were grown? Check! Money saved? Check… they did just that… They returned to their own paradise… Dominica. One way tickets? Check! 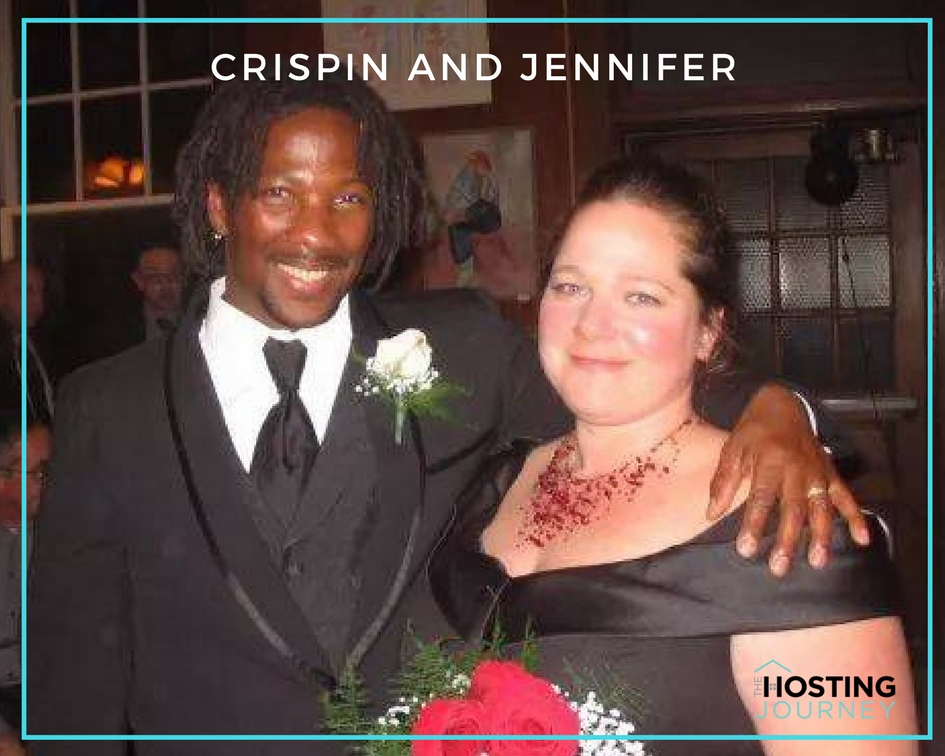 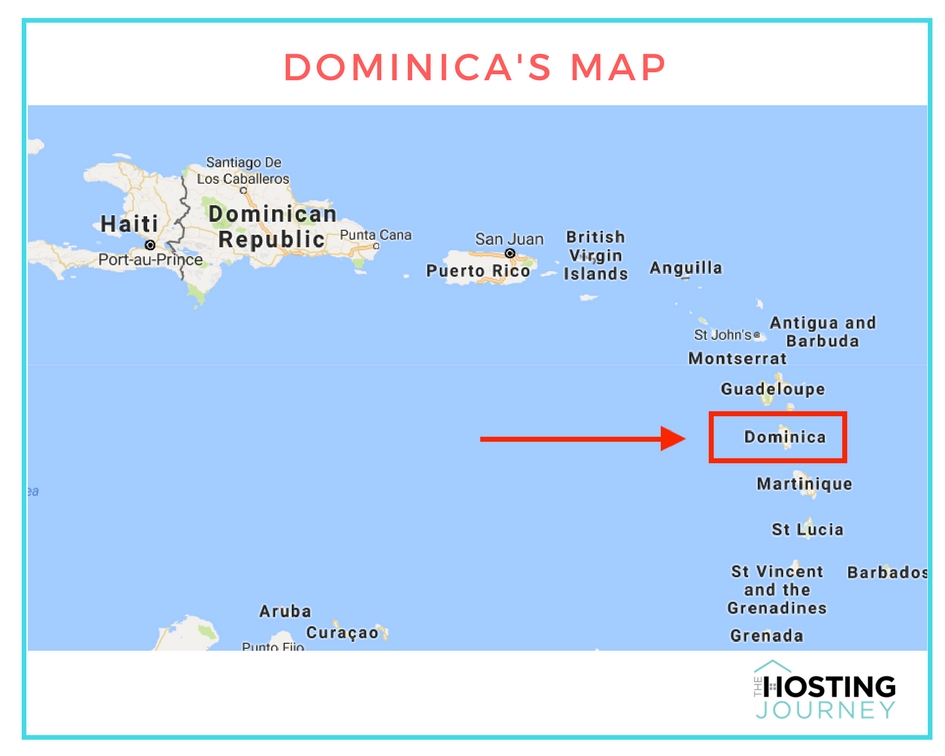 Hideaways of TiBay Heights is Born:

On Christmas Eve of 2015, after a decade of working hard, saving pennies, and building their first of two cottages yes, two beautiful cottages, they welcomed their first Airbnb guest… The listed cottages even had a name: “Hideaways of Tibay Heights”… How amazing is that?

A magical place without wifi. Yes, hosts, you can be successful without modern technology… Some guests even welcome it! Just make sure you let them know in advance. Please, let your guests know.

Both of these cottages were handcrafted and created with Dominica’s own tropical hardwood and their hard work. It’s where guests would return to, time and time again. 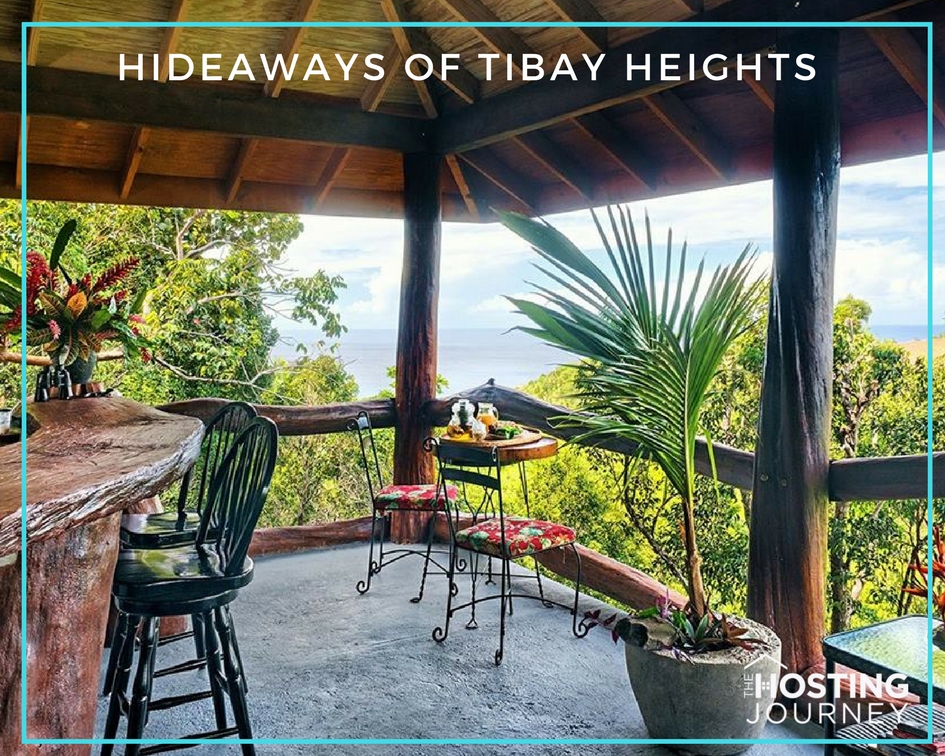 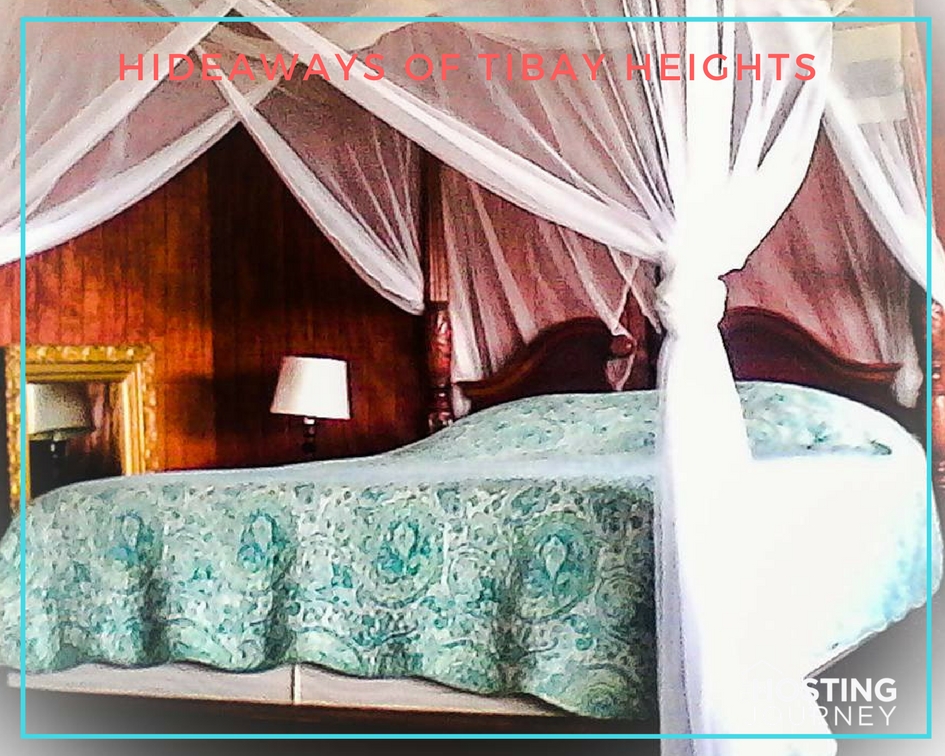 It’s NOT like these islands aren’t used to tropical storms, but this storm was different. Hurricane Maria quickly escalated from a category 1 hurricane to a category 5… In a matter of hours… HOURS. Their hard earned dreams were destroyed. Completely gone… and that paradise island nation out in the beautiful Caribbean sea, Dominica… left in ruins.

Luckily, Jennifer, Crispin, their pets, along with their 3 Airbnb guests. Yes, they had guests at the time of the hurricane. I can’t even imagine. They all survived.

“Rebuilding an Island Paradise: Jennifer and Crispin’s Story” is how they started their journey as hosts, how they survived Maria, and what’s next for them … Is there another return to paradise? Stay tuned… You’re about to find out. 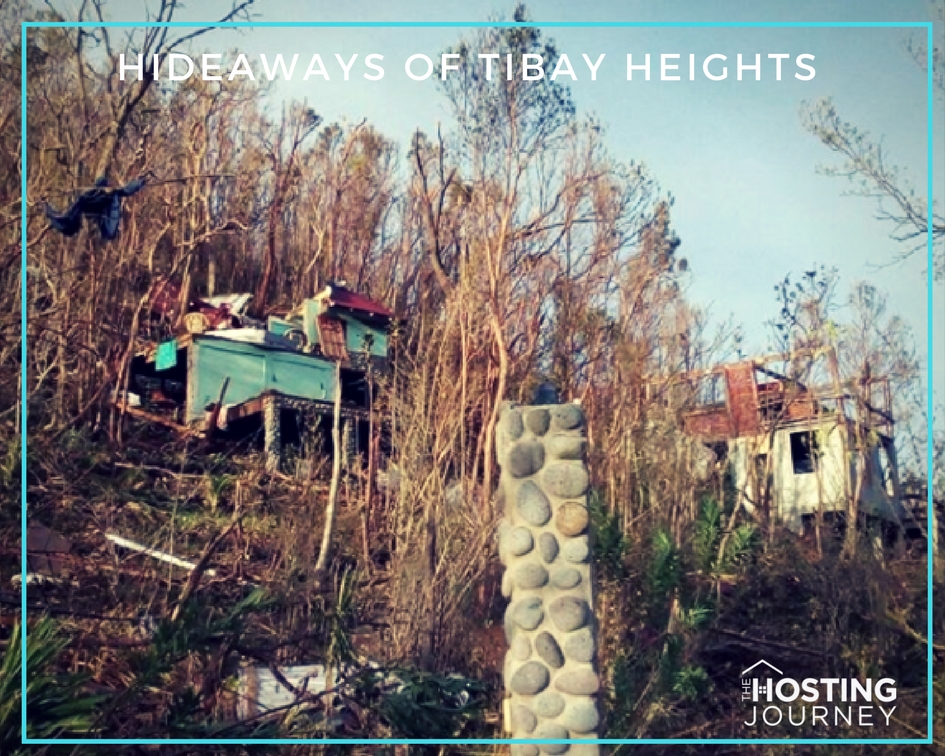 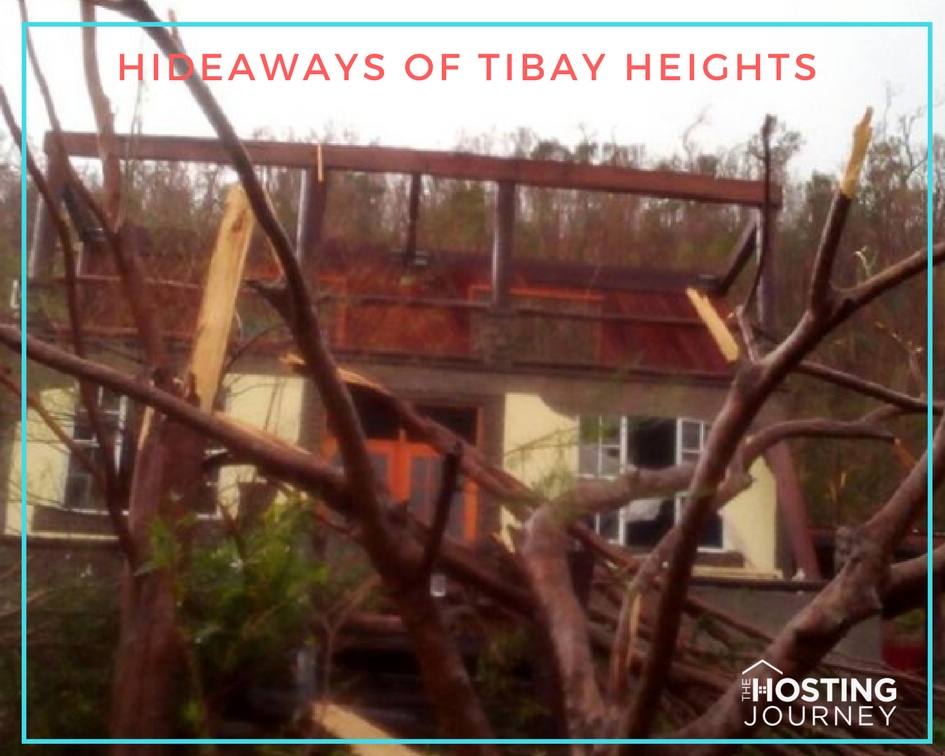 You might wonder why I decided to speak with Jennifer from Dominica and not a fellow host from MY own island of Puerto Rico, since my island was devastated by Hurricane Maria as well.

Well, Puerto Rico is getting aid and assistance from the United States, so though it has been difficult, people are getting much-needed help…

But many other nations that were in the hurricane's path and were heavily affected like Dominica haven’t been able to tap into those guaranteed resources. They’re 100% independent, and they are having to rebuild their entire nations on their own… Yes, some world organizations have offered assistance, but mainly they’re on their own…

I know we sometimes don’t know where to donate, and in that confusion of not knowing sometimes stops us from donating. I know it happens to me. Or since it’s no longer part of the current news cycle, we forget that others are still dealing with the after-effects of these disasters.

In this specific disaster, I’ve been helping my mom in Puerto Rico, especially since two months after Maria she’s still without consistent electricity… My brother and I even sent her a generator…but that’s another story for another time.

The truth is, we have tons of hosts like Jennifer and Crispin, who have been devastated by these storms and are courageously re-building their homes and lives… I felt that this interview might, in a small way, garner some attention and perhaps help the plight of people living on these tiny islands, like Dominica…. So, I wanted to share their story with all of you.

2017 has been a rough year across the globe .. We’ve been hit with so many natural disasters that it’s hard to keep track. From Hurricanes Harvey, Irma, and Maria to the earthquakes in Mexico, Costa Rica, Iran, Irag and the wildfires in California… It’s been brutal… and though 2017 isn’t quite over, I’m hopeful that that’s it for the year. Please!!

I don’t want you to despair, though… This episode, like I said before, is more sweet than bitter. It is about hope, persistence, and perseverance. It’s about having a plan and sticking to it. Even when the road has an unexpected detour, it’s about finding your way back and moving forward.

It’s about “Rebuilding an Island Paradise: Jennifer and Crispin’s Story” 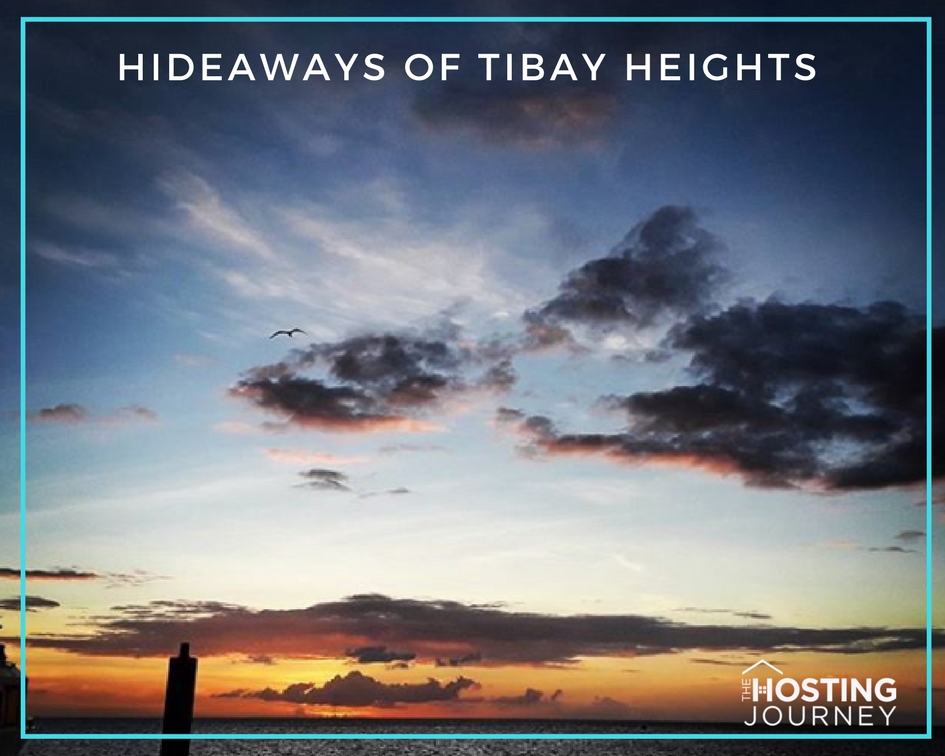 Keep in Touch with Paradise:

I want to thank Jennifer for sharing her very personal story. As an update, Jennifer is currently back in Dominica! Yes! Crispin and Jennifer are busy rebuilding their dream. They have a generator, which Crispin is using during the day for the reconstruction of their cottages. At night, the family and even some neighbors use it for their own needs. A community re-building… together.

If you want to follow Jennifer and Crispin’s story, you can find them on Instagram at “hideawaysdominica.” If you want to view their Airbnb, photos, or want to donate to their rebuilding efforts, I’ll share all the information on the show notes… Go to The Hosting Journey.com slash 23.

I will also be offering an episode about having a “contingency plan” because emergencies do happen, and our dreams can vanish in seconds. You need to have a plan B, C, and sometimes D. The point is to have a plan.…

“Everything You Need To Know About Insurance For Your Airbnb,” where we discussed insurance with CBIZ. Not be sexy, but essential. We ALWAYS need to be prepared to ensure we stay in paradise.

Jennifer and Crispin have a rocky road ahead, restoring their dream, but they’ve done it before and they’re doing it again. And as soon as it’s up and running, I hope to see you ALL in “Hideaways of Tibay Heights” in Dominica… I can’t wait.

Don’t forget to check out their Instagram. Go and see Crispin and Jennifer re-building their Paradise! Or should I say OUR paradise? Either way, I know they’ll be back up and running soon!

Some of the links mentioned are affiliate links. if you choose to make a purchase, I may earn a commission. Commissions come at no additional cost to you.
Episode 17 Everything you need to know about insurance for your Airbnb

Jennifer and Crispin Go Fund Me – Remember anything helps!