Episode 133: From Flipping Homes to Airbnb with Kirby Atwell 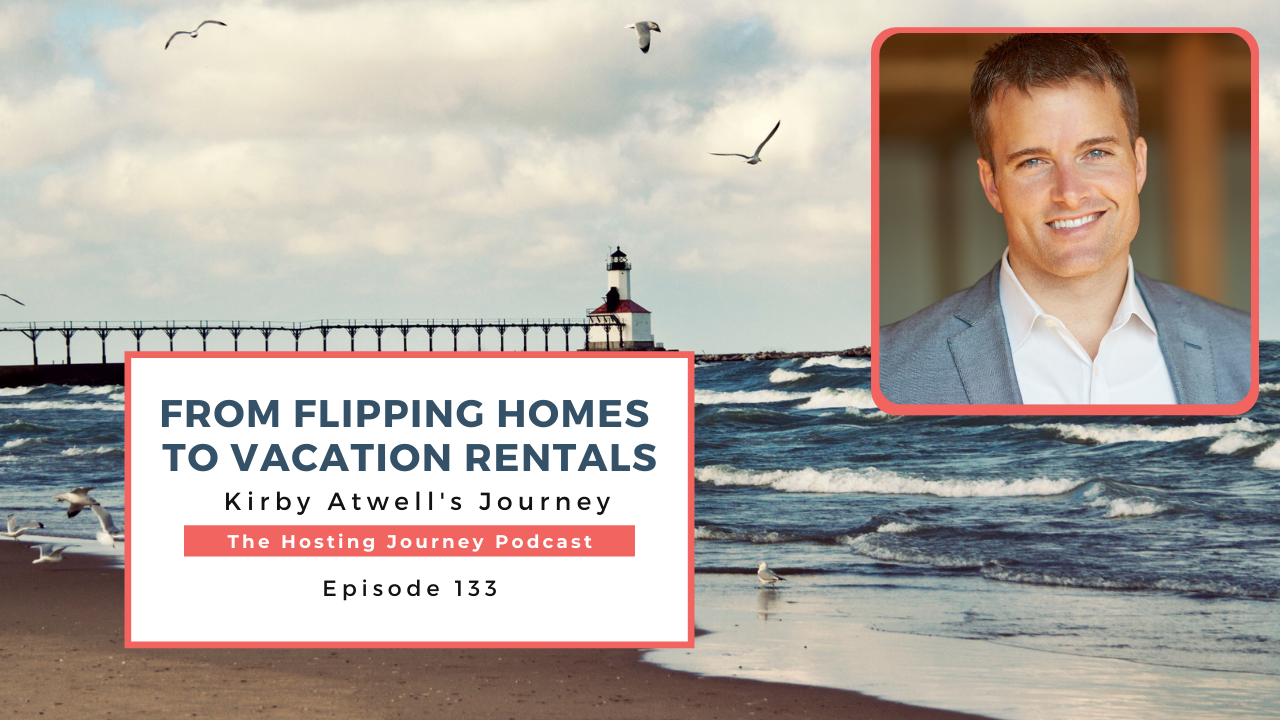 The journey to vacation rentals will look different for everyone. In today's episode, Kirby Atwell talks about how he went from flipping properties to long-term tenants and now short-term rentals.

Kirby is a graduate of the United States Military Academy. He served six years as an Army officer, and in 2011 he started rehabbing homes with two friends—they’ve now rehabbed over 70 homes in four years. Amazing, right?

Listen: From Flipping Homes to Airbnb with Kirby Atwell

Watch: From Flipping Homes to Airbnb with Kirby Atwell

Kirby Atwell knew he wanted to serve in the military, but he also knew he eventually wanted to get out and become an entrepreneur. He went to West Point, graduated, and then was commissioned as an officer down in Texas.

That's when Kirby picked up the book “Rich Dad, Poor Dad” which really resonated with him and made him decide to start buying real estate. He bought a few rentals while he was in the army, and in 2011 he decided to live in the Army and do real estate full-time.

He thought he was going to have tons of success right away. Kirby was going to flip a bunch of properties, make a ton of money. And they ended up flipping 70 properties around Chicago over the next five years.

The reality of long term tenants:

He partnered with two friends from high school, yet five years later, Kirby found himself in the exact same financial position as when he started: no assets.

After having bought and sold tons of properties, Kirby and his friend had made literally millions of dollars; yet it all went back into employees, marketing campaigns, and an office—all to build a business. But there was nothing left over.

Kirby decided to buy long-term rentals first. He just started building up a small portfolio of 26 properties, and the cash flowed. As he worked with a VA program that gave vouchers to homeless vets to pay for their rent, the cash flow was good. But for Kirby, it was very management-intensive.

Next Kirby moved from Chicago to Northwest Indiana, where he discovered rehabbing. He had heard about Airbnb and decided to rehab his basement into a one-bedroom apartment that had a separate entrance—a walk-out basement. In the first few months, they made $24,000, just from the basement. And from there they started buying more short-term and decided to sell off the entire long-term portfolio.It's amazing how Kirby Atwell learned quickly after flipping into long-term rentals to now short-term rentals.

I asked Kirby his biggest surprise going from long term:

“I'm not totally down on long-term rentals,” he said.

“I think they can work. Initially, it was amazing for me, because I would target really beat-up properties. Like I was when I was flipping rehab and building a whole bunch of equity. And then, as I said, the cash flow was good and I could manage them. They were management-intensive, but I could do 1, 2, 3, 4. The problem was, once I started to scale [I learned] the economies of scale aren't as easy as with a long-term rental—that's extremely management-intensive, and you've got a lot of challenging tenants.“

Kirby found an affordable market near where they lived, in Michigan City, and there were a lot of draws there. It's right on Lake Michigan, there are wineries, there's a casino, and there are outlet malls. There are draws for people to come to visit from Chicago or Detroit or Indianapolis. Kirby thought if he could find a property, he could turn it into a long-term rental.

And worst-case scenario: as a short-term rental. If it just didn’t work out or Airbnb went away, or another wave of COVID hit, he could convert it back. He took that mindset going into it. And then as soon as he put it on Airbnb again, he had an overwhelming response from guests and the numbers worked out much better than he anticipated. Then Kirby and his wife really took off with getting a lot more properties.

Kirby says his goal now is to still take a project. But for him, it's such a different place to be in from when he was taking deals because he is flipping and those flips are paying his bills.

“So it's like, taking deals that you might not necessarily want to do. They will just add properties here and there that are more like ‘ opportunity deals,’ but it's not like we have to,” Kirby says, adding “It's a really nice place to be in!”

They recently bought a 45 acre farm that they live on. Now that they’ve rehabbed the farmhouse, their intent is to add some tiny house rentals or experiential rentals on the farm.

I asked Kirby, what he feels holds people back from starting this business.

He said the main questions that come up are these:

What is the biggest lesson that Kirby has learned regarding the difference between long-term and short-term?

Kirby explained that he’d landed on short-term rentals because he never wanted to do the 1% rule that you read about in bigger pockets: the standard rental property that you buy for X price and you can rent for 1% of the gross price. That's the 1% rule it got popular with. And, Kirby thought,s ”That's how people will judge a good rental property? That's great if your goal is to just add rental properties to your portfolio, buy, turnkey, and just own properties as sort of a retirement plan and you're planning to work forever or work till you retire. That was definitely Kirby’s goal.

He added, “Any time you don't start with the outcome in mind, you do a lot of motion and a lot of actions that don't get you any closer to the outcome, because you don't know what it is.” Kirby finally realized it's not just to own properties—it's not just a flip.

“It's to have the financial freedom to be able to go to work because I want to work, not because I have to work, which is a very different approach.”

It was because he wanted to be there, and he discovered that’s a much better place to be. So, that's why once he started analyzing different types of investments, short-term rent, there was nothing else that he could find.

Is there anything that Kirby would do differently?

Kirby admits that part of him has asked, “Would it be better to own properties in the South somewhere, somewhere that's more of a vacation destination that we could use ourselves?”

He has always been very hands-on, and that was part of the reason why he set his rentals in Michigan City. He’s got a great team in place, so he doesn't need to visit the properties anymore.

“I could have done that from the start. I think I was my own worst enemy, doing things that were very inefficient. So, I think potentially I would have explored other markets other than just right around where I'm at. That being said, it's worked out really well for me here. I think, had I not been so conservative, I would have done much better with the appreciation; the way the market's been going the last several years, I could have invested in places where it would have, I would have really made money on appreciation as well as the cash flow. I think I missed out on some of that.”

Kirby's advice for you in starting your Airbnb rentals?

“Get super-clear on your specific outcome. Don't do what I did — I wasted a lot of time trying to look successful as opposed to actually working toward my goal.”

Kirby had the fancy “Before and After shots” of the flips, and they made a bunch of money. But they spent just as much, and the taxes on the flips, all that stuff. He thought that's what success looked like, until he finally realized that what was a true success for him was being able to spend time with his family and stay home and have more flexibility.

Kirby admits that if he would've gotten clear on that earlier, he would have hit it a long time ago. So his final words of advice are: