Ep 114: Airbnb Updates That Will Impact You, September 2020 Edition 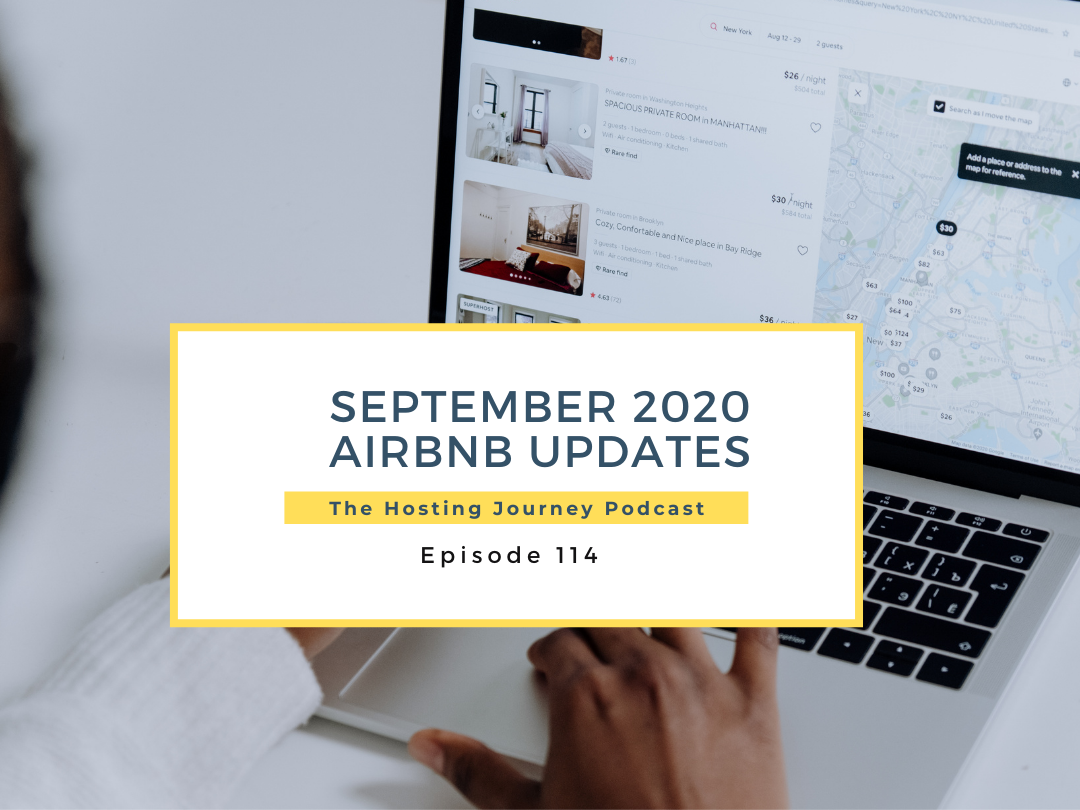 Dear hosts, my last episode all about Airbnb was at the beginning of summer, and so much has happened since then. It’s time to get caught up with Airbnb Updates That Will Impact You, September 2020 edition.

In today’s episode I’m going to talk about:

Dear hosts, we now have Catherine Powells, Airbnb’s new Global Head of Hosting who is providing Airbnb’s updates via videos. There have been three videos since the beginning of August. (The last video from Brian was back in May.)

Catherine joined Airbnb this year, and she comes from Disney.

In each video, Catherine updates something different. At the latest, she talked with Global Head of Operations Tara Bunch. BTW, Tara used to work for Apple. They're bringing the big women now.

If you’ve called Airbnb with any issues in the last few weeks, you probably didn’t get to speak to a customer service person, even if you were a Superhost. They were giving priority to reservations that were arriving in the next 72 hours or emergency situations.

Just because something is important to you, it doesn't mean it's an emergency for Airbnb.

How do I know? Because this just happened to me.

My Experience with Customer Service:

Nowadays when I get an inquiry or reservation request for La Casita in Puerto Rico I make sure that the guest is aware of the local strict regulations. Such as requiring you to show a negative COVID test when you arrive at the airport or limiting the beaches for exercise only.a

If someone wants to come for a vacation, I don't know if Puerto Rico will provide the best experience with everything that is closed. And we have a curfew of 10 pm. Oh yeah, that is still happening.

A guest booked, and two days later he wanted to cancel. I said “Fine, I'll fully refund you,” but he also wanted Airbnb's fees, which it’s not my problem and I can’t give it back to him.

Both of us called Airbnb because the guest was blocking my September calendar. This was late August, and you know I wanted those days opened. Neither one of us could reach customer service. The guest got a response that Airbnb would cancel in two days. Four days later: nothing.

I wasn't a happy host, I moved the guest's reservation to January since I knew no one was booking that far ahead, but guests were booking September. Days later, Airbnb finally canceled the reservation.

How is Airbnb Fixing Customer Service:

Tara and Catherine talk about the customer service issues we hosts are having. Part of the problem is due to the fact that Airbnb reduced their staff by 50%. In addition, they didn't expect travel to pick up so quickly; but it also meant a lot more cancellations and issues.

Fewer staff and more issues mean they decided to make changes like priority support for bookings within 72 hours.

Tara, you got your work cut out for you. I’m so glad they are updating the customer service department.

If you had guests in July, go and double-check your bank account because Airbnb had some technical issues releasing the payments. They're saying it was small; but it’s important to you if you didn't get your money, especially at a time like now. Nothing about money is small.

In the latest video, Catherine and Tara spoke about this delay and how Airbnb introduced additional monitoring to identify issues before they happen. Yay us.

Remember that if you're a new host, your identity needs to be verified before certain payments go out. Airbnb also sends another verification after payments reach a certain financial threshold.

Here’s a useful tip: Make sure you check your dashboard or junk folder for any Airbnb messages.

I know that parties are a big issue for us as hosts. Trust me, I know. I had a guest throw a party at Eveland which I talked about in Episode 69 An Unauthorized Party In My Home and I shared details about the resolution in Episode 88: Tuning-In to the Airbnb Legal Drama Brandon McKenzie

The current Parties and Events policy prohibits the following:

Also, be aware of the following points regarding Airbnb’s policy on Parties and events.

If you're a current Superhost, Airbnb has extended your status through March 31, 2021 — as long as your response rate is at least 90% and you have a 4.8 overall rating.

Airbnb is waiving the criteria for the number of stays and cancellations until the next assessment.

Dear host, if you meet all four Superhost criteria, you'll be eligible for the $100 USD Superhost bonus. Here’s a quick review of the four criteria.

You’ll want to go to the Dashboard to check out your performance status.

Catherine didn't talk about cancellation policies, but here’s the latest information as of September 1st:

Do you still have any reservations that were made before March 14th with a future check-in date? If so, that guest can cancel and be refunded.

Check your calendar to see if you still have any lingering reservations and contact your guests, be proactive.

This is the latest news from Airbnb. Customer service, July payout, Parties and Gathering, and Cancellation policy.

I’m happy to share it with you because I always want you to be informed and in the know.